"Well, it's done! Where are the drinks being served?"

Sujiroku is the eldest son of the chairman ofr of the Tenjinbashi family, but when his father died, he had to assume the role of leader at a very young age. Sujiroku's family's belongs to the japanese mafia(Mafia has conecction with the Goketsuji Family), however he is not interested in mafia's bussines, he just enjoys their celebration festivals and has participated in many important cultural events all around Japan. He usually travels with a lion mask and a pair of drumsticks;  It is said that a million spirits dwell inside them. The lion mask and the drumsticks where inherited from his best friend who died,  this friend shared his love for the festivals .

A certain night after his participation in a festival, Tenjinbashi saw a young man that seemed to have been waiting for him. The man introduced himself as Yukinoue Hizumi, and told him how much he liked his work and also told him that he was a ninja and showed some of his techniques.

After a while of talking, Hizumi proposed to him to participate in a martial arts tournament and in that way promote the Japanese traditions. With his spirit burning like a blaze, Sujiroku prepares himself to fight into the tournament. Which would be his fate? 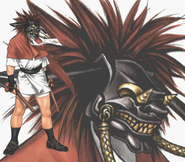 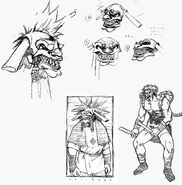 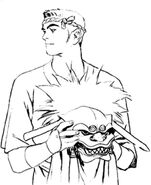 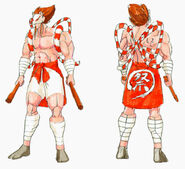 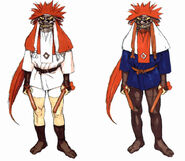 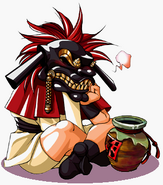 Add a photo to this gallery
Retrieved from "https://powerinstinct.fandom.com/wiki/Sujiroku_Tenjinbashi?oldid=8356"
Community content is available under CC-BY-SA unless otherwise noted.