"Umm...The taste of the steel. It is an extraordinary liquor, isn't it?"

Rudolph Gartheimer (ルドルフ・ゲルトハイマー) is a character in Groove On Fight, serving as the opponent you face in the game's story before Bristol Weller. Gartheimer was voiced by Masashige Maki who also worked as a designer in Prikura Daisakusen.

Rudolph Gartheimer is an aggressive man who is feared by all who know him. The only person who has seen his tender side is his young servant, Damian.

Originally his family was part of the Goketsuji clan. But after certain events in the past, they were considered a disgrace to the family and were exiled by Oume. The Gartheimer family lost it all.

As time went by, his family gradually became influential and rich again, but Rudolph still had a great resentment and hatred for the Goketsuji and especially for Oume. He knew about the changes in the rules of the tournament and entered with the objective of getting control of the family fortune. His plan is to use the bad relationships between the twins to destroy the Gouketsuji clan. 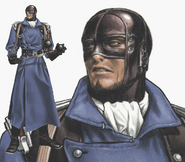 Early design
Add a photo to this gallery

Retrieved from "https://powerinstinct.fandom.com/wiki/Rudolph_Gartheimer?oldid=8590"
Community content is available under CC-BY-SA unless otherwise noted.