"Are you okay? I guess I am still excited from my last recital..."

Remi Otogiri (乙霧 レミ, Otogiri Remi) is a character in the Power Instinct series, appearing in Groove On Fight. She was voiced by Keiko Ijuu, an actual representative director from Noise Factory.

Remi is the only daughter of a high class family, and her family are descendants of an evil witch that lived in Japan several years ago (a secret kept by all the family members). Remi's father is a famous musician and her mother is a prestigious fashion designer. She is calm and classy and her motivation to fight is show the world the power of music. Although it's not explained how, the Otogiri family indeed has blood ties to the Goketsuji family.

Remi's ideal man would be someone who would be able to play in an ensemble with her and doesn't like uncultured boys.

The names of Remi's special attacks are in Italian, particularly because that is the language most commonly associated with music. Most of the names are musical references, "Capriola" translates to "somersault" and "La Morte" means "death" (both of which are suitable names, since these moves see Remi performing a somersault and transforming into a small Grim Reaper, respectively). "Corno Riflesso" ("reflected horn") might be a mangled version of "Corno Riflettente" ("reflecting horn").

Her own name also references music. Remi's first name is the union of the Solfege music notes Re (D) and Mi (E).

The living music note that follows Remi is a demon that was created by her mother to be her bodyguard, it's name is Kuroma (クロマ).

Remi is one of the most popular students in her school, not just for her beauty, intelligence, or refined manners, but for being able to use magic. Some of her classmates introduced her to a girl named Popura Hananokoji, who also has magic powers, and since that day Popura and Remi have been very good friends.

One day Popura invited Remi to her home, and there she met Popura's mother, who told them some anecdotes of her youth. Popura showed a special interest about the tale of a martial arts tournament where her mother participated when she was teenager.

Several days later Popura went to visit Remi and asked her to participate in the tournament that her mother talked about. However, Remi wanted nothing to do with it, arguing that her parents would never give her permission to participate in an event like that (and also because Remi is against violence). But Popura found Remi's weakness and told her that if they became the winners of the tournament she will have the money to create concerts around the world and in that way she could help the poor people. With that as her dream, Remi finally accepted Popura's proposal. 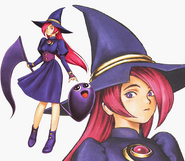 Add a photo to this gallery
Retrieved from "https://powerinstinct.fandom.com/wiki/Remi_Otogiri?oldid=8507"
Community content is available under CC-BY-SA unless otherwise noted.