"How you use your fighting skills determines whether or not you win or lose the match."

Reiji Oyama (大山 礼児, Ōyama Reiji) is one of the characters designed for the series, making his first appearance in Power Instinct and has been a recurring character since.

He is somewhat of a parody of Ryu from the Street Fighter series. In this sense, he could also be considered a parody of the characters who are very much like Ryu in personality. Reiji was voiced by Seigo Aihara in the three first games and by Kijitani Toshiyuki in CR Goketsuji Ichizoku.

Reiji was designed to follow the traits of the typical Karate practicioner found in other fighting games. However, his personality is based on Hoshi Hyuuma from Kyojin no Hoshi (aka Star of the Giants), a 1966 baseball manga which had later got an anime adaptation two years later in 1968. Also in the first game of the series, the 1P cursor was placed over him when the character select screen had first appeared. Because of these factors, he was wrongly considered to being the main protagonist of the series when in actual truth the real main protagonists were the Goketsuji twins themselves. However, in some manga adaptations of the series, he is normally set as the hero of the story.

Reiji is very straightforward and honest and is the ultimate training fanatic. He does not do well with minute details, but excels at physical strength matches. He works part-time for a construction company to exert his excess energy. He also constantly searches for a worthy opponent.

Reiji is one of the characters with more conections with others and by the in-game dialogues, seems to be popular between the female characters of the series, even above Sahad who is the the narcisist pretty boy type character of the series. Along the series he gained rivalry with Oume, who defeated him on th 16th Goketsuji Tournament. In Shin Goketsuji Ichizoku Toukon Matrimelee appeared the brothers Buntaro and Shintaro who idolize Reiji and in Matsuri Senzo Kuyou appeared Rin Oyama who is Reiji's cousin sister, according to the relation diagram from CR-Goketsuji Ichizoku, Reiji became mentor of the three teenagers and is training them, however the relation between his disciples is very bad.

Reiji is not interested in a martial art or sport other than karate. He holds Black belt 6 Dan by the time of Power Instinct 2. When he was younger, he won all stundent karate championships for five consecutive years, but after that. he stopped participating in that kind of tournaments, cause there wasn't any challenge for him, he just became to strong for that competitions.

Reiji who is an expert in karate, begun to look for tournaments which allowed its contestants to use any kind of techiniques at full strength rather than regular karate tournaments in order see his true potencial. However he didn't found to much of a challenge either in no rules combat until he participated on the 16th Goketsuji Tournament.

Reiji was bitter about his defeat on the 16th Goketsuji Tournament. He spent his days thinking what he could do to become stronger, trying to find a way to make his training harder and more efective. One day at the construction company, while he was working, a spanner fell down from the top of the place, Reiji had a quick reaction saving one of his partners to be beaten by it. In that momment, Reiji had an idea(something that doesn't happend very often).

That day at his lunch time, Reiji called his fellows of the cheering party, Reiji told them that he needed their help for training and ask them that every time they were close, without any warning, no matter what, no matter when or where they will be, they should attack him with all their strenght individually or in groups at any time even if the oportunity to attack comes when Reiji is on the bathroom, they should attack.

At firts some members expressed their concern, but at the end the response was positive as they felt honored to help to his role model in his training and at the moment they stop talking, Reiji was surprisingly attacked by his friends. So thats how Reiji started with his new training regime, every day he received sorpresive attacks at any time of the day, he was really enjoying training with his friends and feeling happy as results of his efforts were starting to show up (His body was getting visibly stronger)

But as the days went by, the number of friends willing to keep training decreased til finally nobody showed up. One night Reiji was sleeping on his bed, suddenly, he felt something weird like he wasn't really alone, he tought was only his imagination he closed his eyes, but then something attacked Reiji, who barely evaded the attack, when Reiji got up and turned the light on, he saw three of his friends of the cheering party on his room.

Reiji feel moved that although the training was very hard, tiresome and sometimes a bit dangerous, there was still some of his friends supporting him to achieve his goal of becoming stronger. Reiji couldn't hide his tears of joy.

Reiji's goal is to be as strong as his father was. Knowing about the lineage of martial arts of the Goketsuji family, Reiji is sure that he will find many worthy opponents and by facing them he will start his way to becoming a true warrior.

After a year of intense training, Reiji's muscles and height increased. Even his spiritual power seems to be stronger, so the tournament is the perfect opportunity to find out if he will be able to take advantage of his new attributes. As fruit of his discipline, not only has his previous attacks also have improved, but he has some new attacks to use against his opponents.

His boss Daikichi, was who helped Reiji to prepare for the 17th Goketsuji Tournament and using concepts from civil engineering taught him most of the new techniques that he the new tournament the most important was the Ryu kishou Enzan.

Always looking for a good fight, Reiji signed in for the Goketsuji Friendly Exhibition Tournament to have the opportunity to fight against the one called "the strongest man in the world".

One of Reiji's dreams is to produce a movie that shows the way he thinks a man should live. Participating in the Bonnou no Kaihou tournament, he will be closer to realize that dream!

Reiji joined the Matsuri Senzo Kuyou tournament without even thinking about it. He is all about fighting, so a fist-to-fist encounter with the other combatants was enough to make him happy to join.

Reiji as he appears in the first Power Instinct

Graphic of Reiji, Saizo and Ryuto from Power Instinct Legends (featured in the Japanese version)

Reiji during his Stress Shot in Matsuri Senzo Kuyou 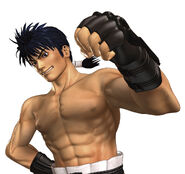 In The King Of Fighters '94, Rugal (the final boss) has a collection of statues of his defeated foes. One of the statues looks like Reiji performing the Raikoukyaku. It is possible that this was a stab at Atlus from SNK.