Power Instinct 2, known in Japan as Goketsuji Ichizoku 2, is the second entry to the series, released in April 8, 1994 in the arcades in both Japan and the US. It was the first game made on CAVE's first generation arcade hardware.

In this sequel were five new characters, an improvement in graphics and some fixes in the gameplay. One of the most notable characteristics was that some of the music in the game were full vocal songs, a trait that several later entries in the series would share, though the first game also had a couple vocal songs.

The gameplay is generally the same that in the previous game, but with some improvements and the addition of a super bar called the "Stress Meter", which increases when one's attacks are blocked or when attacked. A Super Attack can be executed when it is full, which uses up the entire meter. In addition, when the Stress Meter fills up, a character becomes engulfed in a flame of their own energy for a brief moment, which protects from any incoming attacks from the opponent and knocks them away if they are too close, inflicting a small amount of damage. However, if a transformable character transforms in the middle of the battle, the Stress Meter will not fill up regardless of damage or blocked attacks until it wears off.

This would be the first title in the series to introduce its more humorous take on the losing portraits of the characters after a battle. In some fighting games, such as Street Fighter and Art of Fighting, the losing character's portrait would show them beaten up and bleeding; Power Instinct 2, however, parodies this where their faces are painted up or drawn on in a comical fashion.

Oume Goketsuji, Leader of the Goketsuji clan for the last 60 years, finally was defeated by her younger sister, Otane, the day where she surpassed her older sister finally had arrived.

One night, Oshima Goketsuji unexpectedly appeared in front of Oume and offered her help to take revenge of Otane.

According to the rules of the clan, if the leader dies or quits, one new tournament should be held immediately to find a successor.

That same night Oshima and Oume sent their servants to dispose of Otane, so while Otane slept, she was kidnapped and thrown to the ocean.

Next day Kuroko found a letter supposedly written by Otane, where she declined to her right to be the leader of the clan.

One week later all the competitors from the previous tournament and other family members were convoked to be informed about Otane's decision and the beginning of a new tournament.

Power Instinct 2 was ported to Sony Playstation with the subtitle Chotto Dake Saikyo Densetsu (literally "A Slightly More Violent Legend"). In this port, there were some added characteristics from Power Instinct Legends, like a 2 player mode that allowed the player to fight in teams of two and the feature to play as Ninja Boy and Chuck. Overall, it was a good port of the arcade game, but the most glaring flaw was that anytime a transformable character changed into their alternate version, there was considerable loading time that interrupted the match. Chotto Dake Saikyo Densetsu used an arranged version of the OST and included some new songs like a new version of "Give Me Money" sung by men and the full chorus version of "Namidano".

Power Instinct 2 Promo Art
Add a photo to this gallery 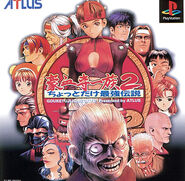 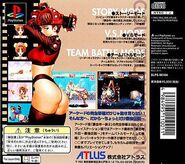 Japanese box art (back)
Add a photo to this gallery 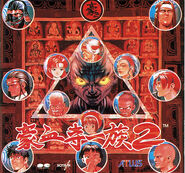 PI2 OST cover
Add a photo to this gallery

Retrieved from "https://powerinstinct.fandom.com/wiki/Power_Instinct_2?oldid=8072"
Community content is available under CC-BY-SA unless otherwise noted.