This article is about the game. For the page with information on the series, see Power Instinct (series).

Power Instinct, originally known as Gōketsuji Ichizoku (豪血寺一族) in Japan, was the inaugural game released in the series. The Japanese title of the game translates to "Gōketsuji Family", relating to the titular cast. It was released in Japan on November 20, 1993 and was brought over to the US some time after following the wake of games such as Street Fighter II and Mortal Kombat. To differentiate it from other 2D fighters at the time, it featured a more humorous take on the fighting game genre.

Those of our clan inherit the fighting spirit of our bloodline "Goketsuji." The name responsible for the ongoing feud for control of the clan.

As outlined in the family code, the bloodline must continue to grow even stronger and eliminate all those who are weak.

The Goketsuji Clan is currently the 3rd wealthiest family in the world. As a result, there are many who seek control the clan and the family fortune.

Because there were so many fighters vying for control of the clan, Oshima, the 3rd Goketsuji Leader, declared the following to all:

The clan will hold a fighting tournament every 5 years.

The winner of this "test of strength" tournament will assume immediate control of the Goketsuji clan until the next tournament, at which time the seat for control will be open once again. Any member with blood ties to the clan may enter.

- Decreed this day in the 14th year of the Taisho era -

Power Instinct had eight selectable characters and one unplayable boss character, Oume Goketsuji, who was a palette-swap of Otane. Originally, every character had a specific win quote for each defeated foe, but that was reduced to only one win quote for each character in the English version.

The game uses a four button layout, two buttons for punches and two for kicks. Every character has their own stage, attacks and special moves. The special moves are performed via inputs of joystick movements and buttons like most 2D fighting games of that era.

All the stages are wider than they look. When the objects in the corners are broken, the stage itself is expanded upon, making a bigger playing field.

The player will fight against all the characters and, after every three matches, will have the chance to play one of two bonus stages. One of them consists of knocking away Kurokos who run into the screen, and the other involves breaking jars tossed from around the screen. This would be the only game in the series to feature bonus games.

When all the characters have been defeated, the player will go on to face Oume, the current clan leader, and once she is defeated, the ending for that character is shown.

One of the most unique features of the game that would become a recurring theme throughout the series is transformations. Both Oume and Otane Goketsuji had alternate forms that can be accessed via a particular throwing move, which would then allow them to become stronger versions of themselves for a limited time (approximately 10 seconds) before reverting back to their regular forms.

Other features were a double jump, and dashing attacks that were stronger than a normal attack. Dashing would, however, also increase the damage received if the fighter is counter attacked in the process.

The game gained console ports later on for the Super Nintendo and the Sega Genesis, and both were nearly identical. The English console ports of this game, however, had several omitted features, such as Karaoke Mode with the lyrics for the songs "Tatanka no Uta" and "Otoko no Karatemichi", character biographies that popped up in between demos, the intro demo to the game and the scene of Oume where she speaks to the player before she fights them (which changes if she's fighting Otane).

Another difference between the Super Nintendo and Super Famicom versions are the endings; the Super Nintendo version replaces them with a Congratulations screen with the character portraits used in the pre-fight screen, while in the latter the endings are still present, though slightly different from those in the original arcade version, drawn in a style similar to the endings found in Power Instinct 2.

Also of note was that in the Super Nintendo version, Otane's Super form could be made a fully playable character via a code that must be done during the Atlus logo screen.

The Sega Genesis port of the game did not get a release outside of Japan. It also had a few differences from the Super NES version, such as an option that allowed the player to customize the damage ratios of each character's special moves, and a Team Battle Mode. 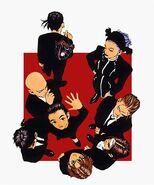 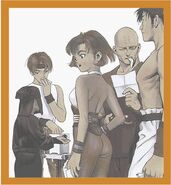 US arcade flyer (back)

Front page of the operation manual for the arcade version. 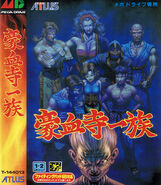 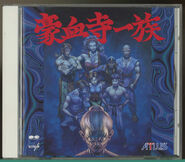 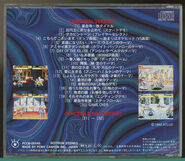 Japanese title of the arcade game 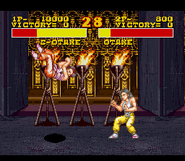 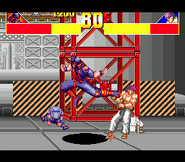