Kinta Kokuin can transform into a dog-like "superhero" thanks to his deceased dog Poochy. He died on January before the tournament in Power Instinct 2, but Poochy's loyalty to Kinta is so strong that even after his death he still protects Kinta, giving him all of his strength to fight. For this reason, Poochy is unique in that he is more of an individual character than the other transformations, who are more like alternate personas. He speaks with growls, whimpers, barks, and howls. Poochy is very friendly and likes to make new friends, but is really sensitive to criticism, as it is not only shown in some quotes, but also in his ending in Matrimelee, where Sissy breaks his heart after rejecting him because she doesn't like dogs. [1] He is also the only character who can understand Saizo's "Popepepa" code language. 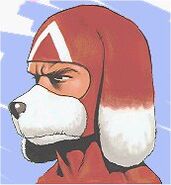 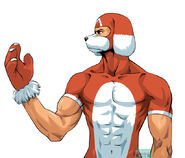 Poochy's death prior to the events in PI2