Oume & Otane are basically Oume Goketsuji and Otane Goketsuji with each other strapped to their backs, which is how they appeared in Groove On Fight. Since Oume decided to share the position of Clan Leader with Otane, this meant that both sisters would have to fight in the tournament together as one person, rather than fight separately. To make up for this, Falco was chosen to be their partner.

The sisters retain the same special attacks as they had in previous entries in the series, though they have a few techniques that are unique to Groove On Fight, such as summoning their mother from the heavens, or calling the spirits of their relatives to trample the opponent. Unlike the other entries, the sisters do not have a playable transformable form, though they do transform into their youthful forms when executing certain moves. 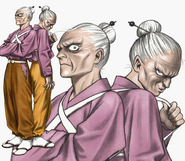 Oume & Otane as they appear in Groove On Fight 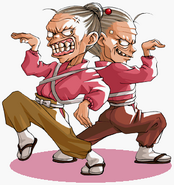 More concept art for Oume & Otane
Add a photo to this gallery
Retrieved from "https://powerinstinct.fandom.com/wiki/Oume_%26_Otane?oldid=7427"
Community content is available under CC-BY-SA unless otherwise noted.