"This was a G.R.E.A.T Success! Yiheheee!"
—Groove On Fight

M.A.D (full name being Max Ax Dax) is a character who appears in Groove On Fight. M.A.D. was voiced by Takumi Kawai.

Renowned for being brilliant, M.A.D is a lonely and mysterious man for whom the only thing of importance is science and all of his actions leads to make experiments and research. He used to work for the Gartheimer family.

Solis, who came to the future to protect the Goketsuji family, due to a faliure in her time machine, crashed in a place near of M.A.D.'s laboratory. M.A.D. saw the machine and intrigued he approached. A girl dressed in some kind of police costume came out from the machine. M.A.D told to the girl that her machine had a very interesting appearence and that he would like to take a closer look to it.

Solis intuited that M.A.D. had knowledge about mechanic and scinece and asked him if he coul help her to reppair the machine. Excited for having the opportunity to work with unknow science, M.A.D offered lodging to Solis while he worked on fixing the time machine. Days After Solis managed to get in touch with the Goketsuji twins.

Eventually, the invitation for the Goketsuji tournament arrived to M.A.D.'s laboratory, among the rules it said that only teams of two fighters are allowed to participate. Solis asked M.A.D. if he would be interested in participate with her. M.A.D. thought that the tournament was perfect to get many experimental subjects, so he accepted to team up with Solis. 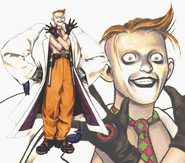 Add a photo to this gallery
Retrieved from "https://powerinstinct.fandom.com/wiki/M.A.D?oldid=8357"
Community content is available under CC-BY-SA unless otherwise noted.