Hizumi is a young man obsessed with ninjas,  he is also fan of manga and anime. In fact, all of his fighting techniques are based on characters from various anime series, and he based his hair style on a character from a manga.

His love for the ninjas was influenced by his father, who is also a ninja-maniac. So much so, that during his childhood, he was attempting to walk on the walls and used medical bandages as bandannas.

Aside from his otaku hobbies, he likes video games and collects rare soda cans.

During a certain night at a summer festival that was held near his neighborhood, Hizumi Yukinoue witnesses all the activities carried out by the master of ceremonies. Feeling admiration for the job of that man, Hizumi waited till the festival was over to talk to him. The man introduced himself as Sujiroku Tenjinbashi, "Japan's master of ceremonies, number one". After a while of talking, both men recognized each other as lovers of the Japanese traditions. Suddenly, Hizumi had an idea and told Tenjinbashi about a tournament that was going to be celebrated soon, and that if they signed in for it they would be able to propagate the beauty of the Japanese culture outside of Japan. Delighted by the Idea, Tenjinbashi accepted the team up with Hizumi for the Goketsuji tournament. 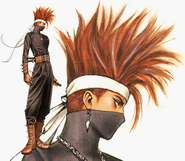 Official artwork showing Hizumi getting the inspiration for his hairstyle.

Hizumi collecting a soda can.

Add a photo to this gallery
Retrieved from "https://powerinstinct.fandom.com/wiki/Hizumi_Yukinoue?oldid=7431"
Community content is available under CC-BY-SA unless otherwise noted.