A proposed name by fans for the series, if a US release is possible, was Power Instinct Festival: The Ancestors Commemoration, however, no information on such has been released.

In February 22 of 2012, an updated version of the game was released for the Arcade system NESiCAxLive. Many changes and adjustments were made. For example, the transformed versions of the transformable characters now have their own Stress Shot techniques.

In Matsuri Senzo Kuyou, Atlus added some new characteristics like ability to dash in the air and perform "Aerial Combos" which have a similarity to those in the Marvel vs. Capcom series. Another new feature is that all the characters have "Chain Combos" that are performed by pressing the four buttons in order (A, B, C, D) and for first time in the series the "Guard Break" bar that fills when the character blocks an attack. Once the bar is full, the player will become vulnerable to an attack for a short time.

Another new feature to the series is a "rage mode" that the character can enter if their super meter reaches MAX when the last attack executed was a normal attack (if blocked) or special move, or if the character used a taunt. The character flashes red and can inflict more damage for a short time.

After the first two battles in the game's one-player mode, the player has the chance to practice special moves and combos with the game's in-game training mode, which come in three different levels. A fourth option can allow the player to skip this. After four more battles, a second bonus game plays where the player must achieve a certain amount of points within the time limit. Both games feature Maruta as a training dummy.

Different from the last two games, each character has their own stage and theme music, some of which are remixed versions of older themes, and the stages are once again expandable by breaking the objects in the corners just like in the first three games in the series. Also of note is that particular super attacks now have a special animated sequence at certain moments during their execution.

To all the people related to the Goketsuji clan…

As actual leader of the Goketsuji family, I, Oume Goketsuji, invite you to a fighting tournament that will be celebrated in commemoration of the Senzo Kuyou ritual.

In this tournament, each contestant should be focused in the victory, because it's possible that the ancient living god of the family be present among the participants, so the winner of this test of strength will be considered a living god, untouchable for the common people.

Will we see the birth of a new legend? 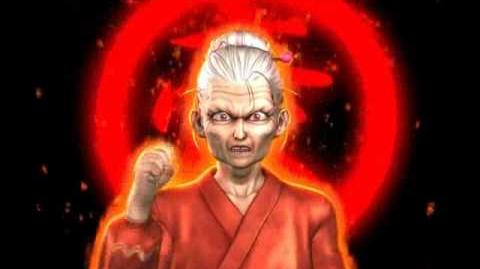 Each of the Matrimelee characters are playable with a separate code for each one, unlike in Matrimelee where the hidden characters could all be unlocked with one code. All codes must be done while at the player select screen.