Damian Shade (デミアン・シェイド) is a character in Groove On Fight. While he basically only watches over Gartheimer's battle in the background, he can be made into a playable character by beating the game with any two characters in the console port. It is possible to play as him in the original arcade version via hacking, but he's in a very incomplete state. Damian was voiced by Seiji Kawagishi.

Damian is an orphan, who was adopted by the Gartheimer family. With time, he became a very special person to his master, Rudolph. Damian is a pacifist and dislikes violence, but his personality totally changes if someone tries to hurt his master. He has a special power that allows him to heal a living being just by touching them. 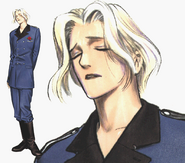 We're not sure why Keith is there. 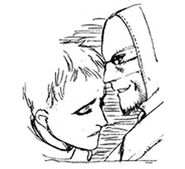 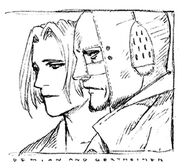 Retrieved from "https://powerinstinct.fandom.com/wiki/Damian_Shade?oldid=8838"
Community content is available under CC-BY-SA unless otherwise noted.