Chris Wayne(クリス ウェイン) is a character who appears in Groove On Fight, and is the son of Keith Wayne and Annie Hamilton. Chris was voiced by Takeshi Yamane.

An extremely violent boy, he is able to hurt anyone at the drop of a hat. Chris often has troubles with his parents due to his bad behavior and to get distance from them, he accompanied his professor and friend Larry in his journey (Chris told his parents that the journey was for "educational purposes").

Chris is the leader of a powerful gang in the Bronx, New York. Some time ago, his gang attacked a young man, who turned out to be an acquaintance of Chris. Chris stopped the members of his gang and when the police arrived and were about to arrest him, Larry helped Chris avoid the arrest. Since then they have become good friends.

Due to the constant conflicts with his parents, Chris decided to leave home. He remembered that his friend Larry told him that he was about to go on a trip to explore some archeological places around the world, so he went to Larry's home to try to convince him to let him go with him.

Just when Larry was prepared to leave, Chris arrived and after begging him in many ways, Larry thought that Chris could help him in his investigation so he will focus his energy in positive way and finally accepted on the condition that Chris stayed out of trouble. Chris accepted the deal, but he secretly took a knife that he always carries with him, hiding it from Larry.

After a day of fooling around, Chris headed to the hotel room where he and Larry were staying and saw Larry reading a letter. He approached him and realized that the letter was the invitation for the tournament that his parents told him about when he was younger, and also noted that the rules of the tournament forced the participant to have a team partner.

"Dude, you are a Goketsuji! I'm also a Goketsuji. If you want, I can be your partner for the tournament." 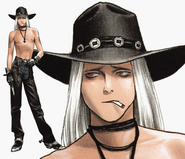 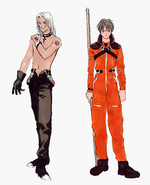 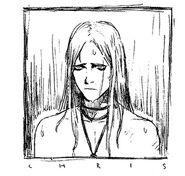 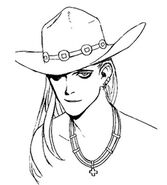 Add a photo to this gallery
Retrieved from "https://powerinstinct.fandom.com/wiki/Chris_Wayne?oldid=8002"
Community content is available under CC-BY-SA unless otherwise noted.