Chinnen, formerly Thin Nen (陳念) is a recurring character Power Instinct series. He's a parody of the Buddhist monk-type characters. Usually, they are all depicted as good people with little desire; Chinnen is the direct opposite. He was voiced by Kazuaki Yuguchi in CR Goketsuji Ichizoku.

During the early stages of his development, the designers wanted a funny and friendly looking Chinese character, similar to Jackie Chan. However this was changed to more easily fit him into a family of greedy people.

A violent individual with obscene desires. This religious man studied ancient rituals to gain mystic powers. He will do everything he can to get what he wants, whether it be women, food or money. He’s afraid of nothing and is opportunistic and greedy. In spite of this, he is not an evil person and he will sometimes speak to his opponents in a Zen-like fashion.

In a manga series, he has a son named Feng Yan (鳳岩) and although he appears in the family tree, there is a note that says that he is a character from a manga, so it is not clear if Feng Yan is part of the official canon.

Like most of the men of his close family, Thin-Nen was a mischievous boy that always got in troubles and caused conflicts everywhere he went.

Thin-Nen's mother prayed everyday hopping that Thin-Nen someday will change, but her prayers didn't seemed to be heard. Afraid that Thin-Nen became as terrible as her husband, she begged to the monks of a Buddhist temple in another city to take Thin-Nen as disciple. Having faith that Buddha's teachings will change Thin-Nen behavior.

Unfortunatelly, her hopes were destroyed when after some months she received a letter from the monks, where they say to her that they had never meet such an awful kid as Thin-Nen and that they could not have him in the temple anymore because his terrible behavior was starting to affect other kids, so they will send Thin-Nen back to her in a couple of days. The Monks sent Thin-Nen back to his home, but Thin-Nen had another plans and with some money he took from the monks, he went around looking for fun and didn't got home.

Thin-Nen is the owner of a strange skill called Bonnou Power and it is the source of his strenght. This skill requires strong mental power but in in exchange, Bonnou Power allows to increase the strenght and resistance to pain. to master the Bonnou Power, Thin Nen went to live to China mainland a land with three tousand years of history and secrets, he became obssesed to find the secrets of martial arts.

He learned that for mastering the Bonnou Power he had to get rid of any fear, any doubt or any remorse and just focus in getting anything that he wanted, something taht wasn't to achieve due his personality. Thin Nen mastered the Bonnou Power and this allowed him to handle any kind of training, no matter how hard or painful would be. So he went from a buddhist temple to another, in each temple he learned a wide variety of techniques and became a master in all the temples he stepped in, gaining an overwhelming power.

One day Thin Nen heard of a buddhist temple at the north, the temple was surrounded by fire and it was said that inside the temple there were several misteryous scrolls. Thin Nen managed to surpass all the obstacles on the temple and found the scrolls, the scrolls contained the secret to master some supernatural skills.

With a greedy motivation, Chinnen participates in the Goketsuji Tournament to get his worldly desires granted.

Chinnen has a theory: If he can have a luxurious life, he would be able to leave his obscene wishes and violent temperament behind. So, after he heard about the new chance to get the family fortune, he trained very hard and polished his tricky fighting techniques. In contrast to what people might think about someone with Chinmen's life style, he is in very good shape.

In order to get a good prize, Chinnen participates in the Goketsuji Friendly Exhibition Tournament

It is possible he entered the Matrimelee tournament in order to marry Princess Sissy, perhaps due to her position and wealth.

He is participating in the tournament as a result of his middle age crisis.

"There must be something good" this was his exclamation. Chinnen hopes that all his desires to come true participating in the Senzo Kuyou tournament 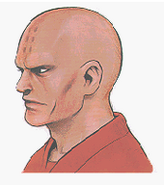 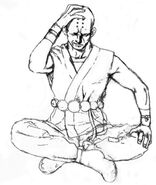