"The world needs a strong, brilliant leader....Someone like me."

Bristol Weller (ブリストル・ウェラー) is a character in Groove On Fight, serving as the story's main villain. Bristol is actually revealed to be a Devil Summoner in the final round of the game, going into an alternate appearance, Bristol-D.

Born in a prominent family, Bristol is a very intelligent, yet hypocritical man. He achieved a good social status at a young age and has received several awards for his charity activities, but he uses this to hide his true personality. He is really a heartless, ambitious man that is able to do anything to get what he wants.

In recent years, he got a high rank inside the Gartheimer's company. Even with the success in his life, Bristol's ambition was to go beyond that; he made a pact with demons, so in exchange for supernatural power he must bring destruction and pain into the world. 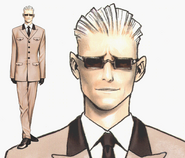 Retrieved from "https://powerinstinct.fandom.com/wiki/Bristol_Weller?oldid=8988"
Community content is available under CC-BY-SA unless otherwise noted.