"There is no one who has seen the true darkness and lived to regret it."

Bristol-D (ブリストル-D ) is a character in Groove On Fight, serving as the final boss. Bristol-D was voiced by Yoshikawa Toranori.

Kazuma Kaneko, who is one of the main character and demon designers for the Shin Megami Tensei series, was assigned to create a character for Groove on Fight with the idea of making a connection between both series, so it was decided that the final boss would be a demon summoner.

Many of the demons that Bristol-D summons are in fact cameos of various demons from the Shin Megami Tensei series, which is also published by Atlus. Likewise, Shin Megami Tensei's Persona series has referenced Power Instinct on a couple occasions.

Bristol Weller's true identity. Bristol-D is a dark summoner who gained huge influence worldwide and also great financial power by committing several crimes in the year 2115. When this was discovered, he was arrested and put in jail, but he eventually managed to escape. With the help of the technology present on his era and his abilities as devil summoner, Bristo-D travelled to the past, changing events to his convenience to finally conquer the world.

Most of his techniques involve summoning demons to attack his enemies. He also has the ability to control other people's minds.

In many of his attacks, Bristol-D will be aided by a variety of demons, several of which hail from the Goetia. 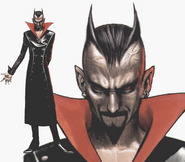 Chibi Weller and Bristol.
Add a photo to this gallery
Retrieved from "https://powerinstinct.fandom.com/wiki/Bristol-D?oldid=9368"
Community content is available under CC-BY-SA unless otherwise noted.